I'm listening to the fourth (and final) interview with Tracy Twyman on THC.  I've previously listened to the prior interviews, and I've listened to Tyman promoting Genuflect on FreemanTV's podcast.  Right now, she's discussing the Q phenomenon with Greg in a very esoteric and intriguing light.  Rest in Peace to Twyman.  It's unfortunate we'll probably never get that 'next book' she was talking about, but I'll definitely have to read Genuflect, now.

I followed the Q phenomenon for a while when it began to poke its head up after the Las Vegas Route 66 massacre and the ascent of Trump to the Presidency.  Towards the end of the Trump presidency I 'figured out' that Q was Ezra Cohen-Watnick (ECW), but probably also consisted of other topish-level Trump Admin. personnel, such as Dan Scavino and General Mike Flynn.  ECW (a Jew) had, as I see it, fellow Jewish journalist run cover for him after it seemed apparent that Trump would not be sworn into public office again in 2020.  Mike Flynn has also publicly denounced Q, but I don't necessarily think that exonerates them from suspicion of being part of this Q group (I don't think Q was one individual, obviously, nor is the premise that it was a 'larp', perpetuated by basement-dwelling troll(s), doesn't carry much water for me, either).

The alt-right was promoting Operation Trust theories (relating to what Q really was) later into the Trump Presidency, as well, since Trump is/was clearly Zionist and state of Israel-beholden, and the alt-right lost favor with Trump fairly early on, despite his candidacy being a rallying point in 2016 timeframe, and probably even helped spur on the alt-right as a subcultural populist movement (albeit one that admittedly is a predominantly online one).

God help me, I still sometimes pay attention to X-22 Report, and I see on Trending Bitchute that boomer-tier Q/MAGA true believers are still going strong in some circles that milieu of the conspiratorium.  I see that John Durham (supposedly a Q/Trump ally that had been mentioned when Q was 'posting' to 8chan  [8kun, whatever...the Q posting began on 4chan's /pol/ board, I believe, but transitioned to a more MAGA-friendly online space {8chan, 8kun, 4chan, Endchan: What you need to know}]) is in the (mainstream) headlines again and is gaining some popularity traction in (4chan) /pol/ thread posts in recent days.  Obviously, there is a lot (more) skepticism with regards to Q, 'trusting the Plan', MAGA, etc. post the January 6th fiasco, in particular.  HBO even did a goddamned documentary on Q, as we probably all well know if we're conspiracy junkies and posting or reading anything on the THC forum.

Anyhow, what's your view on Q, if any?  Am I off about ECW, et al collaborators?  Is Q 'finished', or does the phenomenon have any kind of limited 'comeback', as perhaps Durham's investigation into Russiagate and the HRC server and possibly other crimes might indicate?  Is 'Q' good faith or bad?  I think Q is inherently multicultural and diverse civic nationalism/Americanism, and a lot in the alt or dissident right are not going to like Q for that reason in particular, and the fact that ECW is a Jew does not endear him to the white nationalism crowd or folks with a more 'pro-white' and return to tradition mindset.  Still, politically and/or conspiratorially speaking, I'm not sure if the book has been closed on the Q narrative just yet.  The 2020's seem to be full of promise for a bumpy ride, so let's all just buckle-up and brace for impact, because 'the ride never ends...', as they say...

Thank you for coming to my TED talk.

Lol.  Nobody buys the Jim Watkins is Q narrative the (((msm))) would have you believe, but here's more of that spin regardless... 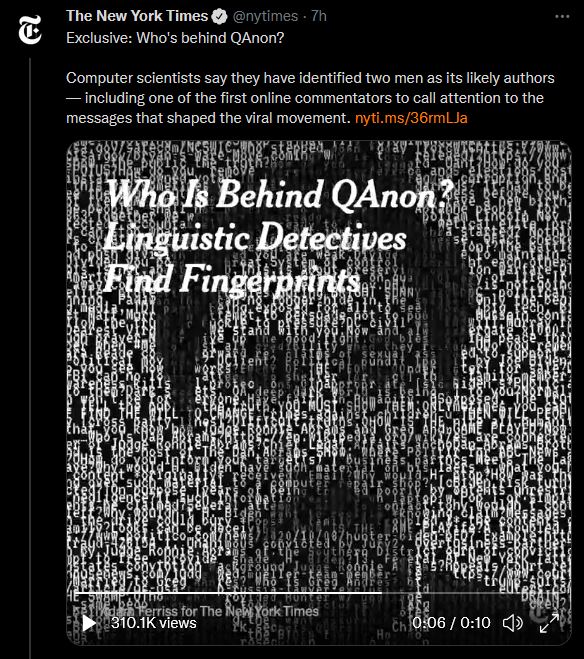 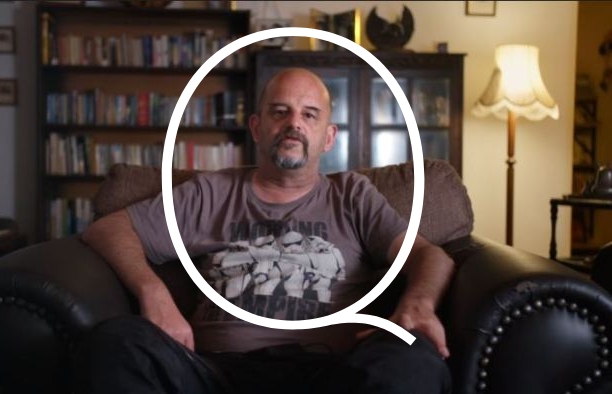 Who Is Behind QAnon? Linguistic Detectives Find Fingerprints

there was a podcast about naval intel's connection to cue... insofar as they were interviewing the founder of the ong's hat alternate reality game. don't remember the exact name for games like ongs hat. but the podcast was saying that cue was one of those type games. i'm posting this to remind myself to dig it up later to add to the thread.

also, barabra marciniak a channel of the pleadians says there are time travelers involved in the operation.

yeah, to say cue was just some basement dweller larp is not an intellectually honest take on it.  it def isn't that.