I decided to get a head start on a writing assignment for an upcoming online summer course, and the Hinckley release came across my research and seemed relevant to the conspiatorium.  Perhaps this thread will be a good resource for further research into Hinckley and the Reagan attempted assassination, since it does seem at first survey that the conspiratorial or deep state connections to this event are relatively scant (I guess Poppy Bush & C[IA]o did a decent job of covering their tracks on this one):

There are several to any number of potentially interesting criminal justice system news articles and reportings to choose from that occurred in the past year. The first of June witnesses the verdict and culminations of the highly publicized Depp-Heard divorce, spousal abuse and rape accusation trial. A search engine relevant news search shows that Presidential near-assassin John Hinkley, Jr. is being granted an unconditional release beginning in the middle of June. Of course, there is the U.S. court trial of sex trafficker and foreign intelligence operative Ghislaine Maxwell, whose trail was unfortunately not given the same public insight to in regards to a televised hearing like many other public-interest trials are, such as Heard-Depp.

I see another intriguing development with a recent John Durham prosecuted case involving former federal prosecutor Michael Sussman, and his recent acquittal for lying to the FBI. Having followed the ‘Q’ phenomenon debacle with some waning interest since its inception in 2016 on politically-themed image boards, forums and through social media, an analysis of this case might be worthwhile one dive deeper into, since attorney general Durham and his investigations are allegedly playing an integral role into this probable Ezra Cohen-Watnick et al Trump Administration associates and officials psy op/proposed ‘deep state’ counter-offensive operation. However, like the inarguably, tangentially related (to the Durham-Sussman case) Maxwell and the Jeffrey Epstein trial-that-never-was, tackling these themes and rabbit trails will likely be produce too much content to adequately address than a maximum 2-page writing assignment will allow.

The Hinckley trail, on the other hand, provides an opportunity to at least nod briefly to adjacent ‘deep state’ narratives and intrigues relating to MK-Ultra and motivations of the cabal of fifth columnists who would and have engaged in Presidential and other public figure assassinations, assassination attempts and intimidation and threats to these effects. The succinct FOX news article states that Hinkley, age 67, is to be released, per a federal judge’s ruling (for the attempted assassination of President Ronald Reagan in 1981), who noted that “If he hadn’t tried to kill a president he would have been released unconditionally a long time ago"1.

Due to the brevity of the news report, it is therefore incumbent upon the remainder of this analysis to review this case history, preferably from a decidedly unsanitized and perhaps even ‘conspiratorial’ lens. Undoubtedly, I am sure we will only be able to provide the most cursory of examinations of said speculative events relating to the Hinckley case here. I am curious, however, as to the depth of research, investigation and speculation (beyond the superficial narrative), regarding Hinckley specifically and any alleged connection he might have to assassination programs and mind control experimentation.
One clear red flag at the outset to the Hinckley case being related to the wider conspiratorial worldview is his possession/ownership of J.D. Salinger’s Catcher in the Rye novel2:

In 1980 Mark David Chapman identified so wholly with Holden that he became convinced that murdering John Lennon would turn him into the novel’s protagonist. The Catcher in the Rye was also linked to John W. Hinckley, Jr.’s attempted assassination of U.S. Pres. Ronald Reagan in 1981...3

While attempting to further incorporate Chapman, the Lennon assassination and the broader mind control programs history of the U.S. intelligence apparatus into this analysis would be foolhardy given the constraints, it nevertheless might be worthwhile to sign off with one or two of sourced content referencing at least a few of these more fringe associated topics and connections to Hickley’s case and personal history to so-called ‘deep state’ machinations in the remaining space left. For example, in an ‘in-house’ 2015 newsletter, relating to GOP Presidential candidates of the time, independent media journalist James Corbett writes:

“In 1981 John Hinckley, Jr. attempted to assassinate Ronald Reagan. It was subsequently revealed that the Hinckleys were long-time family friends and political supporters of the Bushes and that John's brother, Scott, was scheduled to dine with Neil Bush (George and Jeb's brother) the night Reagan was shot. Reagan lived (in case you didn't know), but by all accounts he was a changed man after the assassination. The real seat of power in the Reagan administration became the Vice President's office, where Poppy lived up to his name by overseeing the Iran-Contra CIA drug-running operations. After leaving office, Poppy remained a vital member of the shadow government structure that scholars have identified as the connecting thread from the JFK assassination to Watergate to Iran-Contra to 9/11…”4

In an article first published by independent news publisher 21st Century Wire, which commentator Jay Dyer of Jay’s Analysis website links to, entitled [the] “Bush-Hinckley Nexus: Reagan Gunman Released, Reviving Conspiracy Suspicions”5, further revelations and speculations can be garnered with regards to the deeper conspiratorial connections and intrigues relating to this case.

Suffice it to say, there is insufficient space available here to make further investigations into, say, the literature and findings David McGowan, author of several books including the 2004 published Programmed to Kill: The Politics of Serial Murder6, or the wealth of research and documentation (much of it obtained through Freedom of Information Act requests) relating to MK Ultra7 and other mind control operations of the U.S. and other nation states. Despite this, hopefully this short analysis has still provided enough smoke to prompt curiosity and further interest for the reader regarding Hinckley and the wider, conspiratorial worldview. 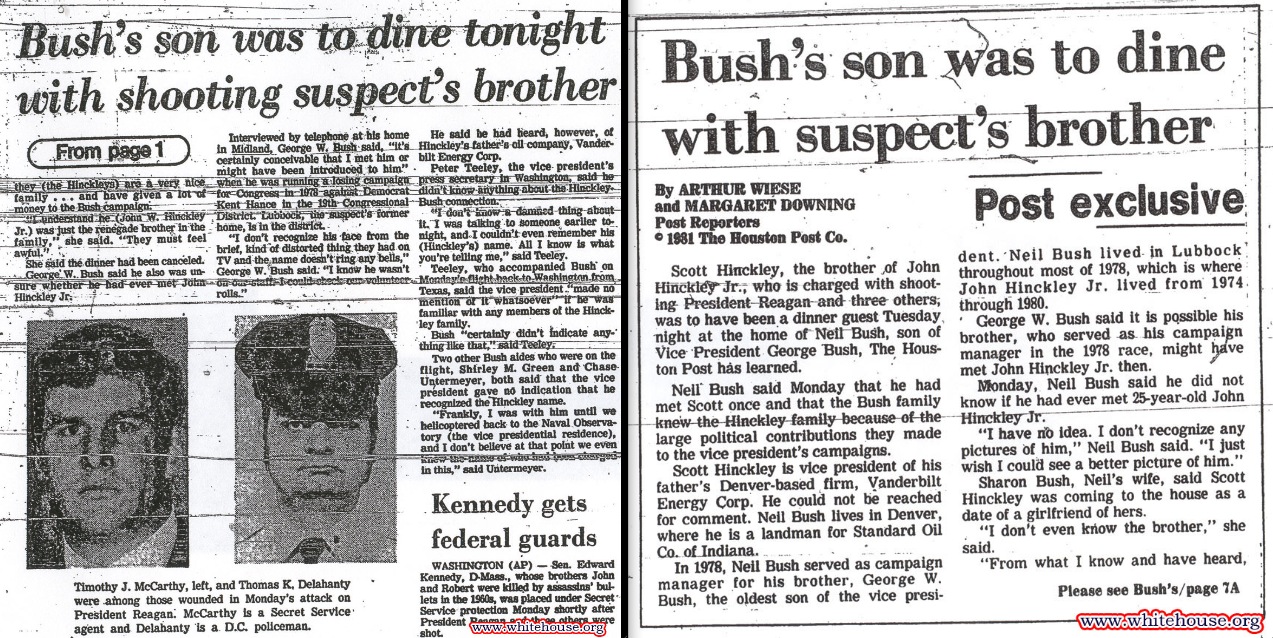 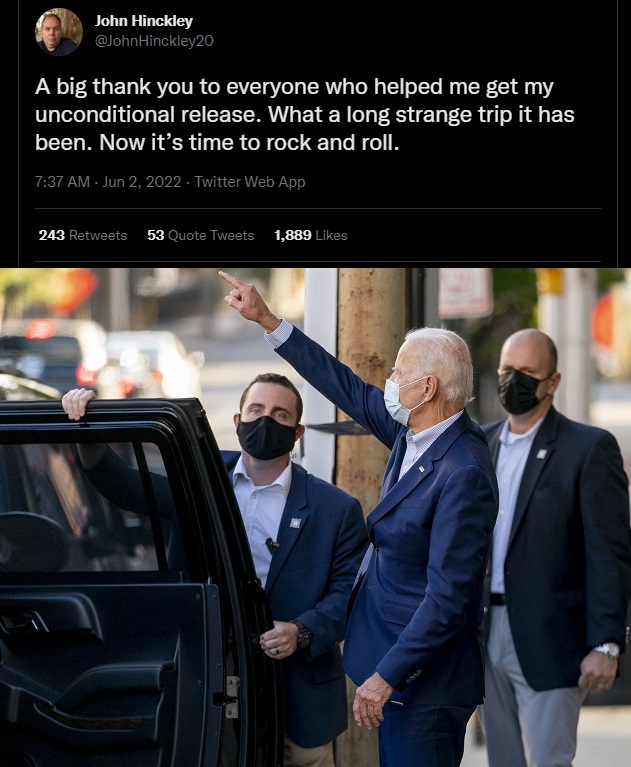