Forums
Fun Stuff
The Case For...
Revolution in the M...

Revolution in the Making: France and Beyond #YellowJackets

I dunno how many are aware of the quite historical events happening across France right now. Dubbed the Gilets Jaunes, or Yellow Jackets, they initially represented a crisis situation to protest the tax fuel that would be increased (Current gas prices are at ~$2.20usd/l in France)
With the latest coverage and hundreds of thousands of protesters in Paris and other cities, the Macron government made a rather pathetic concession to suspend the tax for the 2019 Budget.

This only poured gasoline into the fire, and now the people involved are demanding nothing short of Macron's resignation.

As a french national living abroad, I watched this country being taken over by Macron's handlers a year ago, under the ridiculous in-your-face esoteric initiation (At the Louvre Pyramid no less).

In hindsight, this current movement is the stick that breaks the camel's back, was inevitable. The people's claims are relatively coherent: Sick and tired of living paycheck to paycheck, without dignity and opportunity, and a future to look at.

In terms of media coverage of this event, it's pathetic too. I live in Canada right now, and the only local articles I see are merely mentioning the breaking of storefronts and police arrests. Someone is certainly afraid to trigger this across borders. But indeed, it seems too late, as the Yellow Jackets movement has already been taken across the EU, to Belgium, Germany, Netherlands, Sweden and in growing numbers.

I have to give a big applause to Luke Rudkowski for his amazing and courageous livestreams in the middle of it all (We Are Change Media) and RT France for being the only International MSM to cover this event extensively with public debates and livestreams.
Of course, Macron and his cronies are now resorting to blaming Russian influence in this whole thing. Another shameless abasement of the French people's voice and concerns.

My apologies, as I rushed through this post due to lack of time, but only because I think it's an important topic. Quite historical too. This is the biggest protest in France in at least a few decades since '69. It's also gaining in popularity, way more than the government has.

Do I think they (Yellow Jackets) may have been infiltrated or co-opted by rogue factions?
Possibly, especially the fact that casseurs (those who break storefronts) are in areas that aren't policed and where protesters absent (how convenient, right?). Anything with Colors in movements raises red flags (Check Ole Dammegard's Purple Revolution of Ukraine).
On the other hand, I do understand the general Joe's concern in France, and everywhere in the World, as this show THC is a testament of, and I think those concerns are valid and authentic as well.

What happens next? Nobody knows. But seeing the current government purged out of office followed by some sort of collective decision making process (General elections eventually) would be a good place to look. But I'm not expert. I just hope that this doesn't end in a karmic loop going over again.

If you wish to follow this more, I strongly suggest the two outlets I mentioned, or if you have others, please do share them.

We Are Change Media:
https://www.youtube.com/channel/UChwwoeOZ3EJPobW83dgQfAg

Alas, it was only a matter of time before the Deep State used yet another false flag to disperse the anti-establishment crowds.
Sad day indeed, and I hope the crowd wises up to see this is a desperate attempt at keeping power.

Alas, it was only a matter of time before the Deep State used yet another false flag to disperse the anti-establishment crowds.
Sad day indeed, and I hope the crowd wises up to see this is a desperate attempt at keeping power.

As I write these words, the French are getting ready for Act V of the Yellow Vests protests.
I’m sending my best juju for positive outcomes.

I was reading this article about how the movement is spreading to Israel, which gave me shivers as it’s ground zero for many of the esotericism.

Anyhow, best of luck to y’all.

I wanted to share this recently filmed interview with a french CRS (crowd-control police force) who's decided to blow the whistle on the illegitimate use of force in France. It has english subs as well.

I've been spending some time on the GiletsJaunes lately, and it is such a breath of fresh air, at least for me, coming from this conspiracy sub-culture. People who have had enough are not only protesting in the streets, but many are actually trying to think How can we take the country back (Kratos for the Demos as Etienne Chouard say), not just in a forceful way, but instead, by giving the citizens the ability to take their own decisions collectively.
As such, the commun demand by the YellowVests is the RIC, which stands for Referendum d'Itinitiative Citoyenne. (Citizen's Initiative for Referendum)

The RIC is quite simple and ingenious, in that it's a means (not an end!) to achieve a more balanced decision-making process across the country.
The RIC will give the right to the people to:
- sound the alarm on a topic given enough people (say, if 50,000 or 100,000 people come together on an issue. The proper numbers can be set later, and may depend on the impact (commune, regional, national, international) and scope.)
- vote, amend, and remove laws that don't work. Constitutional amendments would require a RIC process.

The national sovereignty belongs to the people who exercise their rights through its representatives and through the referendum.

As such, one of the first thing a RIC could achieve, and is being proposed, is to change this constitution and amend it as the following:
The national sovereignty belongs to the people who exercise their rights through the RIC.

I've watched hours and hours of debates and discussions on the subject, and mostly everyone agrees that the representitive system as it currently works has failed us. This is why the RIC offers a protective mechanism (fail-safe) that gives the citizens the opportunity to correct.
It's quite amazing, really, to see people thinking in this way. One of the strength of the movement is it's horizontality. No-one speaks on their behalf, but each individual. That means, while everyone may have varying conditions and demands, everyone abhors being spoken on their behalf, and the RIC has become the commun-cause to rally around, to change all other demands (and beyond).

Of course, it gives us many challenging parts, some of which would be:
1) How to instaure this system in its details.
2) Who gets to present the issues
3) What issues will require a referendum.
4.....
But those are discussions that need to happen collectively and by an assembly of citizens (and dare I say, a lottery system may in fact be the best candidate).

But in so doing, we are training ourselves to actually become responsible for the country's fate. This brings me back Robert David Steel's model of Open-Source Everything which would work in symbiosis (and could always be proposed later, through a RIC).

The problem with French I will say, is (we)they're behind in their use of online platforms, or at least personally that I'm aware of. English speakers have platforms like Reddit (co-opted now, I know) or Twitter (not much better, but still).
The French are literally organizing this through Facebook as we speak, which is arguably not reliable.
The good news, many independent devs and programers are coming together, talking about blockchain-based platforms where people can co-operate and propose amendments.

It's the first time that I see a tangible hand at reforming a country, not by force(explosion), but by reason (implosion).
And I do think France is living a historical moment, where it's outcome may be big ripple on the Pond.

I do also think it's naive to think a cornered rat would easily cede its power without a fight.
Macron, and his handlers, are literally fighting for their survival.
Even the cops are starting to turn against them.
The puppet-masters true colours are finally emerging in public, their sheeps' clothing being (finally!) torn apart.

I will keep this post updated as much as I can, but I can tell you on this day of Act VII of the protests, as we approach 2019, it feels as though anything could happen.
Best wishes for the new year to everyone!
Vive l'Evolution!

Here's an excellent piece on the RIC written in English, by the American Herald Tribune:
https://ahtribune.com/world/europe/gilets-jaunes/2769-etienne-chouard.html

I also want to post this video highlighting how Ateliers Citoyens (Citizen ateliers) are popping up all over France to establish a dialogue, and present reforms to the constitution. Alas, the video is in French, but it gives you an idea, how people are taking ideas to the paper. Very moving indeed!

France is cracking down on unauthorized protests and masks:
https://www.bbc.com/news/amp/world-europe-46788751?__twitter_impression=true

Notice how the BBC left this for the very end:

"French President Emmanuel Macron has said a national debate is due to kick off on 15 January in response to weeks of protests by the 'gilets jaunes' - so-called because of the high-visibility jackets they wear.

It will be held publicly in town halls across France and on the internet, and will focus on four themes: taxes, green energy, institutional reform and citizenship."

The so-called Big National Debate (Grand debat national) that'll be held tomorrow is one big joke, and the people know it.
The usual Ordo Ab Chao. But we'll see.
The images that were seen in the latest protests are some of the worst so far. If there ever was a police state this is it.
On the other hand, the flourishing of civic debates organized by the community, not the government, is really inspiring.

When I posted I wasn't expecting them to unroll the "mission accomplished" banner as much as saying TPTB are conceding that there are real issues underlying the protests. That is a marked difference compared with the occupy protests. It means that TPTB are at least scared enough to acknowledge some grievance even if these talks only yield BS solutions. If BS is all that is on offer I am pretty sure the protests will continue. Meanwhile in the states we continue to munch on shit sandwiches.

French banks are closing / having ATM " glitches" to hedge against weaponized withdrawals.
https://cloverchronicle.com/2019/01/12/french-banks-reportedly-begin-to-close-not-allowing-withdrawals-ahead-of-yellow-vest-bank-run/?fbclid=IwAR3NvlXcAeXr46i0f_jgrcE2ApRuVQw68dZJJqE1VLWv7EPfYEmOCVIFQYI

I'm posting this video from We Are Change with Luke at last Saturday's demonstrations (Act IX):
https://www.youtube.com/watch?v=O4QQ5ZkYqyY 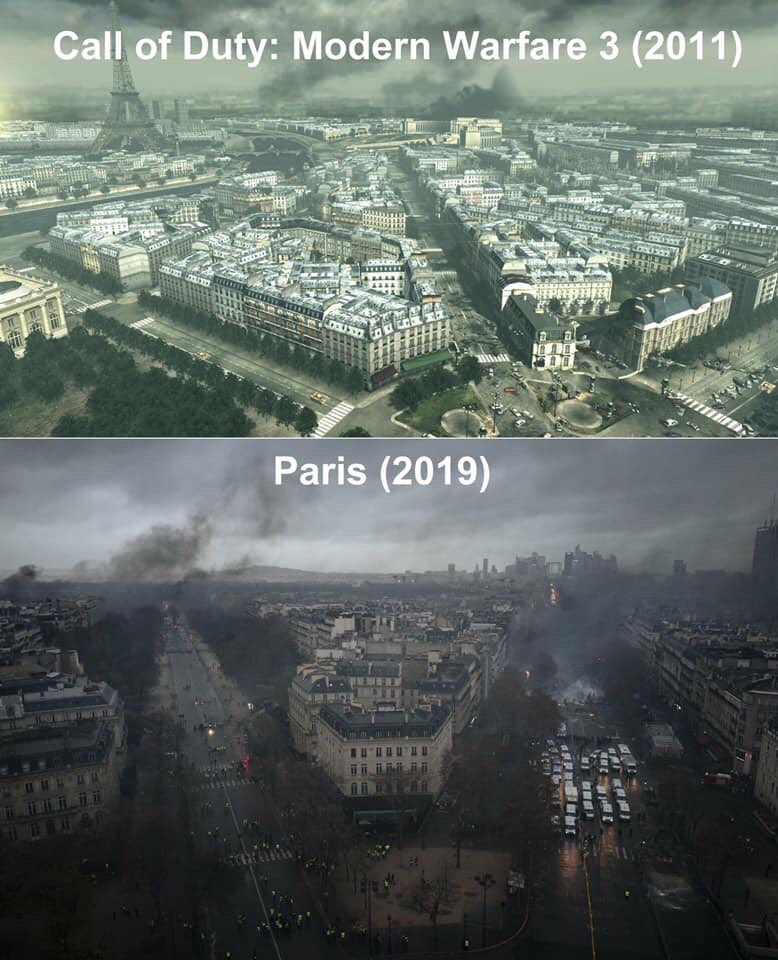 I watched that video of the protests, it looks like an invasion of stormtroopers. Knocking people out cold with water cannons, stomping down others in bum-rushes, and rounding up people in the dead of night - holy crap.